The Alumni association of the PSG College of Nursing was inaugurated on 24.09.1999. Currently there are 730 alumni members registered with this association. The association conducts an executive body meeting every 3 months and one general body meeting every year. In addition it conducts annual workshops/conferences, alumni reunions and career counseling programmes for higher secondary students. It also publishes annual newsletters.

To promote, strengthen and foster fellowship among the former students of PSG CN

To endeavor to seek the permission and advancements of nursing profession

To assist the college to obtain necessary funds for various facilities

To update the knowledge and skills in current trends of nursing

Dear Alumni of PSG CN,
Alumni association of PSG CN would like to invite you to apply for the ‘PSG Distinguished Nursing Alumni Award – 2016’. This award is instituted to recognize an alumnus of PSG CN who made outstanding and innovative contributions in their area of academics, work or society. The selected alumni will be awarded during ‘Alumni Reunion – 2016’We look forward to receive your applications!Please click to download the Application Format and Eligibility Requirements.

The Alumni Association of PSG College of Nursing conducted an International Seminar on “Challenges and Opportunities in Nursing” on July 30th 2018 at PSG IMS&R Auditorium. The alumni of 1995 batch Mr. Mahesh Pillai, Nurse Entrepreneur, State of Texas, Mrs. Padma, Family Nurse Practioner, Santa Maria California, USA and Ms. Roselin Myvizhi, Professor in Shanmugam College of Nursing ,Salem were called as the resource persons .They shared their experience and challenges which they faced in the Nursing profession . They motivated the students with their inspirational speech. All the Faculty and students of PSGCON and alumni from PSG Hospitals attended the seminar. Students clarified their doubts in the question session and were benefited.

The 20th Alumni Reunion was conducted on 04.05.2018 at seminar hall, PSG College of Nursing. Nearly 100 Alumni members participated in the reunion. The Chief Guest was. Dr.M.Prakasamma, Director, Academy for Nursing Studies and Women’s Empowerment Research Studies (ANSWERS), Hyderabad and Prof.Uma Devi T, SRIPMS ,Coimbatore an alumni, B.Sc (N) 1994 Batch was the Guest of Honor. They addressed the alumni and encouraged them.

Career guidance on ‘Nursing as a profession’ was rendered to 10th and 12th standard students with biology and pure science group from various schools. The programme was scheduled in the month of January. By this career guidance programme 500 students were benefitted. Out of this 150 students assured to select Nursing as their career.

PSG College of Nursing had conducted Soft Skill Training workshop on 21st & 22nd of July 2017. Eighty students of 2013 batch have participated and benefited. Two trainers Mrs.Geetha and Miss.Deepika from Silver Tongue, a reputed institution in Coimbatore has conducted the sessions on various topics which included Personal & social etiquette, Resume building, Interview skills, Assertiveness, Time management and Leadership. Students were divided into two different groups and proceeding with the interesting discussion and lectures.

Alumni Reunion 2017 was conducted on 17th November 2017 with 75 alumni members from 2012 batch, 2013 batch and alumni faculty. The alumni reunion Chief guest Dr.Jaeny Kemp, Principal, GKNM Institute of Nursing delivered her inspirational speech on “Work and Life Balance”. The Alumni and Faculty was benefited and understood on ways that should be followed to keep our life and work balance as manager, administrator, leader and as an individual. Business session: The discussion on alumni byelaws and Alumni Election 2017 for the post of President, Vice President, Secretary, Treasurer and Assistant Secretary was held after the Alumni Reunion.

Alumni members of 1997 Batch were the resource persons from various parts of the world. The resource persons were expertise in different fields who works in eminent roles such as Clinical Nurse Manager, Nurse Practitioner, Cardiac Nurse, Nursing Superintendent, Tutor and Lecturer under flourished institutions.

The list of participants of conference was quite impressive and 295 delegates were benefitted.

Nearly 70 alumni members participated and encouraged us in the conference. The Conference was an important platform where experts shared their knowledge and expertise in critical care and how to tackle some of the critical care nursing’s most pressing challenges. The Conference ended up with lively panel discussion with diversity of opinions and experiences.

Alumni get-together 2016 was conducted on 9th July in which 69 alumni members from various batches were participated.

Nearly 10 alumni from 1997 batch were involved enthusiastically. The Programme started with business session with President Report, Treasurer Report and discussion on strengthening alumni association. Followed by Business session, Career enrichment programme was held at Anaikatti in which alumni from Ireland and Riyadh shared their wonderful experience.
The discussion on processing to various parts of world was very informative to young alumni members. The 1997 batch alumni members were honored by Dr.G. Malarvizhi, Principal In charge, PSG College of Nursing for their greater initiatives.

Mrs.Leena Francis, Associate Professor received Award for dedication and invaluable contribution to the institution in regard to International women’s day 2016 from PSG institution.

Mr. Sasikumar, B.Sc.(N) 2010 Batch received Best Coordinator of Batch award and Best Staff of the Batch award in the year 2015 from the Apollo Hospital, Chennai

As a part of activities of alumni association, PSG College of Nursing has conducted Soft Skill Training workshop on 21st & 22nd of July 2017. Eighty students have participated and benefited out of it. Two trainers Mrs.Geetha and Miss.Deepika from Silver Tongue, a reputed institution in Coimbatore has conducted the sessions on various topics which included Personal & social etiquette, Resume building, Interview skills, Assertiveness, Time management and Leadership. On the first day, students were divided into two different groups handled by the two trainers and were proceeding with the interesting discussion and lectures. Following which the next day they were trained with interviewing techniques and mock interview. At the end of the session, on the second day, Mr.Seetharam, Director, Silver Tongue, visited the students and distributed the certificates after his brief inspiring speech. The session concluded at 5pm. The students were delighted and were very happy about it and suggested that this skill training could be a continuing process.

Alumni Association conducted a workshop on “Soft Skill” as a need to enhance Soft skills of future nurses. This workshop was organized on 22.05.15 and 23.05.15. Seventy four students of Final Year B.Sc (N) benefited and participant certificates were distributed.

Scholarships were given to our B.Sc (N) students. So far the students have received the sum of Rs.5000 each as scholarship. Ms.Thenmozhi (2011batch), Mr.Prabakaran.R (2012batch), Ms.Priyah.A and Ms.Vincija.v (2013 batch) were the students who received the scholarship for the year 2015. Our alumni Mr.Saravanan.G M.Sc (N) 2008 batch has sponsored Rs.10, 000 (Ten Thousand Rupees) for the alumni scholarship which was equally divided and given to Ms.Ammu (2013 batch) and Ms.Gayathri (2012 batch).

The 17th Alumni Reunion was conducted on 6.11.2015. Nearly 100 Alumni members participated in the reunion. The Chief Guest was. Mr. E.K. Ponnusamy, President, CODISSIA preside over the function. He addressed the alumni members on the topic “Bonding Alumni with Alma Matter”. Mrs. Jamuna Rani, Reader, Apollo CON, Chennai, an alumni, B.Sc (N) 1997 Batch was the Guest of Honor. She addressed the alumni members on the topic “Building Your Path to Success”. Alumni election was held for the post of President, Vice President, Secretary, Assistant Secretary and Treasurer. Alumni members went for tree plantation. Nearly 10 saplings were planted.

Career guidance on ‘Nursing as a profession’ was rendered to 10th and 12th standard students with biology and pure science group from various schools. The programme was scheduled from the month of January.

The career guidance was guided by Ms. Vanidevi.D and Mr.Tamilselvan.S. Fifty students were participated and benefitted in their ideas of Nursing. Students provided a positive feedback towards Nursing and explored their doubts and clarified.

Ms.Lekha.J and Ms. Yugasubitha.M were guided the students. Two hundred students were participated and benefitted. Around 50 students expressed their interest to join nursing as a profession. They were enquired about the job opportunities and the job security .Their doubts were clarified and encouraged them to choose Nursing as a career.

It was guided by Ms.Lekha.J and Ms.Karthika Priya.S. Sixty students were participated and benefitted. The students asked more questions regarding the career path of Nursing and admission procedure. Their doubts were clarified and encouraged them to apply Nursing after completing their schooling. 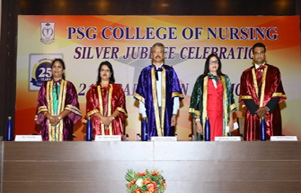 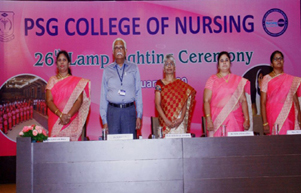 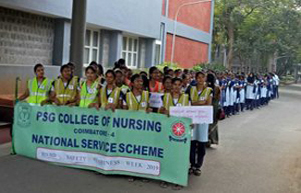 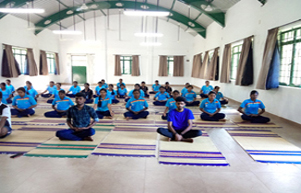